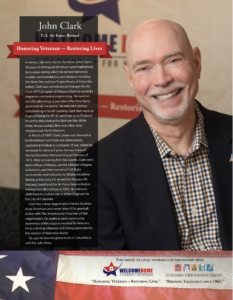 Thank you for your service, John!

A retired Colonel in the U.S. Air Force, John Clark’s 30 years of distinguished service were highlighted by a career during which he earned numerous medals, commendations and citations including the Silver Star and two Purple Hearts.