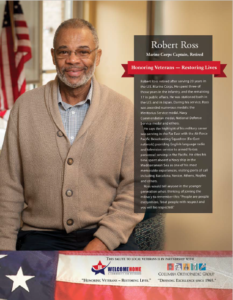 Thank you for your service, Robert!

Robert Ross retired after serving 20 years in the U.S. Marine Corps. He spent three of those years in the infantry, and the remaining 17 in public affairs. He was staioned both in the U.S. and in Japan. During his service, Ross was awarded numerous medals; the Meritorious Service medal, Navy Commendation medal, National Defense Service medal and others.