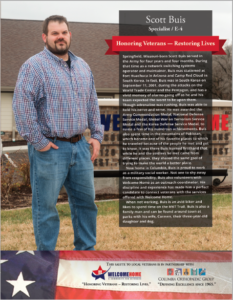 Thank you for your service, Scott!

Springfield, Missouri-born Scott Buis served in the Army for four years and four months. During that time as a network switching systems operator and maintainer, Buis was stationed at Fort Huachuca in Arizona and Camp Red Cloud in South Korea. In fact, Scott was in South Korea on September 11, 2001, during the attacks on the World Trade Center and the Pentagon, and has a vivid memory of alarms going off as he and his team expected the worst to be upon them. Though adrenaline was rushing, Buis was able to hold his nerve and serve.